Sacred Thread Ritual, Janeu, Poonal ritual, and Yajnopavita are all used to describe upanayanam. A young boy is introduced to the concept of Brahmin during this well-known Hindu sanskar, or rite of passage event. A child’s brain doesn’t start functioning properly until they are seven years old. A male youngster is given an exceptional function centred on religious ritualism and works marvellously to show the family and other relatives that the child has grown intellectually and to enhance the spiritual process.

So, in this blog, you will find the tips and do’s for the upanayanam ceremony. So, let’s get started. Moreover, there is one additional tip for you, book the photographers for your upanayanam photography fast, as much delay will lead to no photographer available, which would be a significant loss for you. 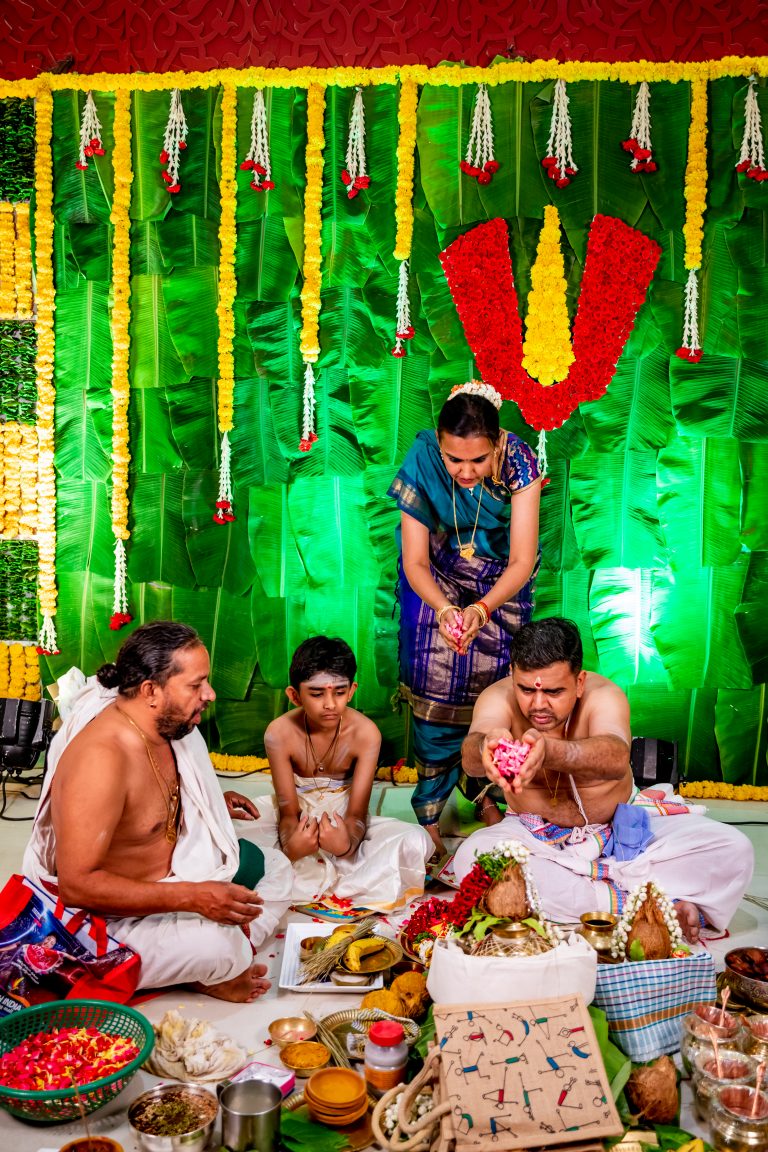 Pick a Sacred thread ceremony or Jeneau Photography package that best fits your budget. All packages offer a full money back guarantee, if you are not satisfied with the output.

All RAW pics will be given as well as Color corrected softcopy of the whole event.

At Client location Hyderabad. Any extra hour charges will be extra. If Album required it will be Rs 500 per sheet for Standard Quality and Rs 700 per sheet for Canvera Quality.

A Photoshoot of approximately 4-5 Hours

Approx 200-250 pics colorcorrected and edited. All RAW Pics will also be given.

A Photoshoot of approximately 5 hours.

Approx 500 pics color corrected and edited. All RAW Pics will also be given.

HD video in Blu Ray of the whole event to be edited and given. 4K cinematic video teaser of the best Moments with song will also be given.

What is upanayanam, and who can participate in this ceremony?

The holy thread-wearing ceremony known as upanayanam is performed to give the male child the right to enrol in Vedic schools and don the thread known as yajnopavita for the first time. It is a Hindu ritual that adheres to specific guidelines spelt down in the Vedas.

The privilege of donning the sacred thread known as Janeu belongs to male members of the highest three castes in Hinduism, called Upanayanam. Some Vedic academics believed that Shudras also had a right to Upanayanam and Vedic education.

Rarely were women also allowed to read the Upanayana and learn Vedic culture before marriage.

When to be a part of the upanayanam ceremony?

The Upanayanam ceremony can be conducted from age seven. We frequently praise our outstanding, sound, or excellent deeds. The holy thread ceremony, intended for children aged 7, 9, and 11, may be rated excellent, very good, and beneficial for enhancing the young child’s spiritual character remarkably.

When this rite is carried out at the age of seven, it is known as Uthamam; at the age of nine, Madhyamam; at the age of eleven, Adhama; and at eighteen or older, Adhamam. The custom of doing this ritual when a kid becomes ten is no longer applicable, according to the ancient Shastras, after he turns eleven.

What is the meaning of the three sacred threads?

The sacred threads are also known as Janeu in India. These thread strands are not ordinary ones. Instead, there is a more profound symbolic importance to how things are related. Frequently, three debts that a guy will never forget define his life. These are listed below:

Parvati, Saraswati, and Lakshmi are three more Indian deities connected to these strands. During the holy thread rite, the groom is compelled to wear these strands, which stand for the significance of three characteristics that will guide him for the rest of his life. These are Parvati’s might, Saraswati’s wisdom, and wealth (Lakshmi). It is believed that a man can only be entire with the help of these powerful goddesses. According to Hinduism, the Thread Ceremony is one of the most significant rites of passage celebrations in a Hindu man’s life. Every Hindu home values it.

Here are some rituals you must follow to make your upanayanam ceremony successful and promising.

It is possible to do Naandi to ask the family’s ancestors for blessings. A very magnificent feast may be arranged on that day. Since Naandi in Sanskrit means “beginning,” the actual ceremonies for the events start with Naandi. At the naandi before Upanayanam, the brahmins are often fed and given a variety of upacharams.

In this step, the mother will provide food for the other four children and the boy, Vatu, or the youngster. Vatu sits down with his mother and the other four kids who have previously taken part in the sacred thread ceremony. The mantras of Purohit would be used to bless the child.

With the aid of a guru, the father drapes the janeu thread over the boy’s left shoulder. Munja grass is placed around the child’s waist to safeguard its purity and ward off evil spirits.

The father, who becomes the child’s guru, can speak the Gayatri mantra, the ultimate mantra, into the infant’s ear.

The child is taken out and told to look at Lord Surya through a tiny hole made by joining both hands.

The child asks his mother and the other female participants in the rite for rice by reciting Bhavathi Bikshapathi. By controlling the ego, a young child can achieve control over his senses and acquire Vedic wisdom.

The little child offers namaskars to the elders to seek their blessings after the sacred thread rite. The child then introduces himself, using his name and Gothram.

Significance of the Upanayanam Ceremony

Upanayanam is often connected with a new birth in the religious community. The sacred thread strands symbolise the purity of the wearer’s thoughts, deeds, and words. Through the Upanayanam rite, the newborn is introduced to the idea of Brahman and becomes qualified to live the life of a Brahmachari by the Manusmriti’s guidelines. In Hinduism, wearing sacred thread is highly significant since it signifies the start of a child’s education.

One additional tip from our side

If you have a sacred thread, you are a real Brahman. However, most people nowadays disobey the regulations that Brahmins are required to uphold and use excuses. Krishna, however, has already described brahmin characteristics in the Bhagwat Gita. A person who possesses these qualities is qualified to get brahmin Deeksha from a reliable spiritual guide. Thus, getting involved in an upanayanam ceremony doesn’t get you into any loss.

Also, don’t forget the upanayanam photography thing as stated above. Check Below our Upanayanam Photography Package for your reference, it can be customised according to your requirements.

Open chat
💬 Need help?
Hi
My Name is Chandan, the founder of Digiart Photography.
Please let me know how may I help you?
Just mention the Event or the occasion of the photoshoot and I will send you a customized Package.
Call Now Button